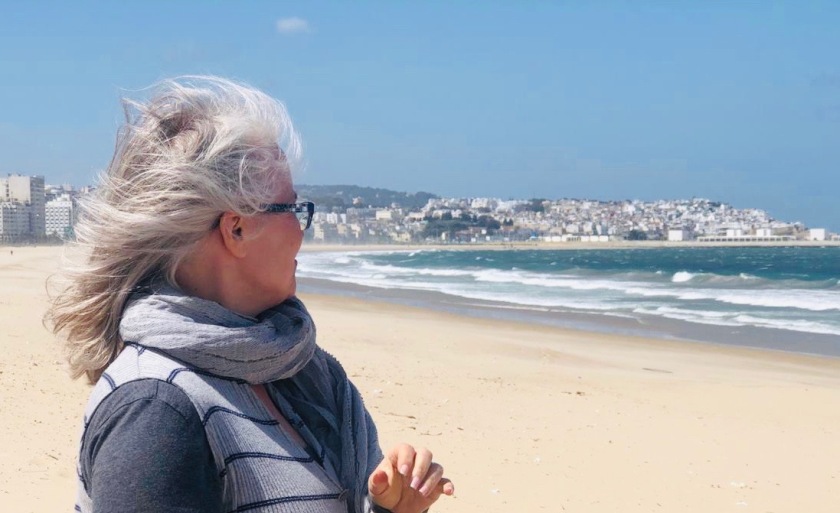 After nearly two weeks away from home and an exhausting schedule, my last day in Tangier was full of conflicting emotions. My time here had been full to bursting with unforgettable experiences, but the end was inevitable, and, to be honest, I needed to get away from the constant stimuli to process all that I had learned. I felt a little on edge as the day began, and I feared that I would lack the grace to be a good guest with my departure hanging over me.

Rachid, on the contrary, was not done being a good host. He wanted to make sure we revisited the best views and the most historic places. He wanted to squeeze in a couple more experiences in the short time that we had.

Item one on the agenda was breakfast and a big surprise. And I was surprised, too! Rachid had told me of his famous friend, the acrobat Mustafa Danger. By some crazy chance, Mustafa was in town for a family event. He met us for breakfast and I had a wonderful chat with him. He is charming, humble, and passionate about giving back to his community. He’s a great example of a Moroccan whose success came from his artistic and athletic talent, along with some amazing good luck along the way. Once a poor kid on the streets of Tangier, Mustafa is now a Guinness World Record holder and a famous high wire acrobat who has performed all over the world. It was easy to immediately like Mustafa and become a fan. What an honor to have the privilege of a conversation over breakfast with a world class acrobat!

After breakfast, we took a drive and ended up at the beautiful Parc Perdicaris. This large, natural area is a popular place for picnics and family outings. The park is built at the site of the home of John Perdicaris, a Greek-American who lived in Tangier for much of his life. He is especially famous for being the victim of a notorious kidnapping by tribal leader. Check out the Wikipedia article on him.

Rachid and I took the morning slowly, as we had nothing pressing to do. We enjoyed the park and a drive, and then made our way to the train station, where Starbucks and McDonalds reminded me that I was definitely on my way homeward soon.

The last remarkable site I saw in Tangier were cats. I was in the beautiful La Gare Tanger Ville, all enclosed in glass walls, with polished stone floors and a gleaming modern interior. And there were the cats. In the food court. Imagine a large modern mall in the United States. Now imagine cats roaming the food court and eating French fries offered by diners. I found it strangely unsettling, and very North African, at the same time.

Saying goodbye to Rachid was difficult. We had been so constantly in each other’s company all week, and who knew when or if we would ever see each other again? I’m not an experienced world traveler, so these temporary relationships are not normal to me. To think that I may never look over the sea at Tangier again… Although I miss my home, I am already missing Tangier as I board the bullet train.

Most of the time, I am simply "Mrs. Olmos," a busy classroom teacher in a rural district in Southwest Washington State. I teach English, WA State History and Drama to students that range from grades 7-12. I believe in allowing students to use their own creativity and individual voices to enrich learning experiences in my classroom. A typical day in my room includes student-led conversations, collaborative projects, and art supplies. Beyond the classroom, I dedicate myself to many areas of educational leadership. Currently, I am a Fulbright Teacher for Global Classrooms and a member of the leadership team for the Washington Teacher Advisory Council. I am proud to be a National Board Certified Teacher, and a facilitator for National Board Candidate cohorts. Over the years, I have served on committees, panels and cohorts at the district, state and national level. My areas of interest include English Language Arts standards, curriculum and assessment, teacher preparation and certification, equity in rural education, project-based learning, and arts-integrated instruction. In my spare time, I have dogs, horses and and a husband to share my life on a small farm surrounded by green hills and rivers. It's a beautiful life. View All Posts

This site uses Akismet to reduce spam. Learn how your comment data is processed.

Links to Check Out

The Center for Strengthening the Teaching Profession (CSTP)