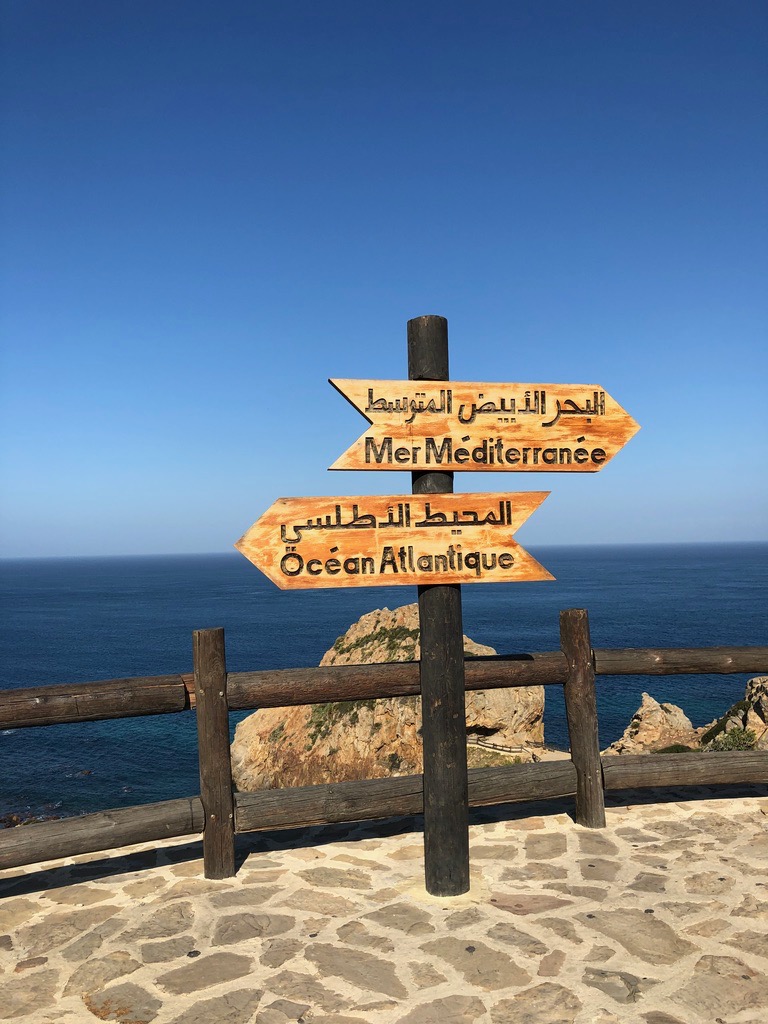 Roman mythology tells us of the labors of Hercules. He had twelve big jobs to do, and they were all supposed to be impossible. But, he did them. Although I am no hero, I feel like this was a heroic day on my part! I truly cannot do this day justice in a short blog, so today we will begin with a generalized list and then hit some highlights.

The activities of the day: a scenic drive to the west of Tangier, past parks and palaces; a short stop at a park; tea and fruit at a cafe at Cape Spartel, featuring promontory with a lighthouse at the entrance of the Strait of Gibraltar; a stop on the beach near cranky camels and disinterested beach dogs; a fascinating excursion to the Grottes d’ Hercule; an equally beautiful drive back to Tangier; a visit to the English for All Club at Mohammed V School; a short stint as judges for a public speaking contest at the Ahmed Chaouki School for extracurricular activities; an amazing performance and talk with the Drama Club at Ahmed Chaouki; a tour of the art and cinema classes; a return to CPGE Lycée Moulay Hassan to co-teach with Rachid’s colleague, Mostafa Saber; a one-hour riding lesson at the Royal Equestrian Club; and dinner at a Spanish restaurant, complete with talented Spanish lounge singer.

This day was magical from start to finish, and choosing highlights is nearly impossible. From a tourists perspective, the Cave of Hercules, or Grottes d’Hercule, was really interesting. I wish we had hours to spend exploring. It is definitely worth the trip. Our drive through the forest and along the coast was gorgeous, with sea vistas and scenic hills.

As an educator, there was even more to treasure. I met such a variety of students: girls attending extra-curricular English classes at a public school, pre-engineering students presenting about 21st Century Skills, young boys debating in French, teen girls debating the merits of social media in language instruction, and some amazing drama students presenting dramatic scenes to address serious social issues. Besides that, one of Rachid’s students, Anas, traveled with us on our morning excursion. He had been very helpful planning for my visit, and Rachid rewarded him by inviting him to come along. It was lovely to spend time talking to such a promising young Moroccan. In fact, this day was FULL of promising young Moroccans!

Finally, there was my riding lesson. I had asked Rachid to help me arrange to ride a horse while I was in Africa, and he did. Now, I was thinking rental horse on the beach. What I got was a one-hour lesson – mainly in French- from a pretty serious riding instructor. I was terrified that I was going to drop of exhaustion, but that was one of the best hours of my entire life. I laughed and smiled until my face hurt. I needed the smell of horses and the feel of a good canter. And, I realized that I would have been a much better speaker of French if I had always had riding lessons from an intense French-speaking instructor yelling, “Allez, allez!” That whole hour was comedy gold, and I didn’t care how long the day had been.

Reading back over this, I am so dissatisfied by how inadequate my retelling has been. The people I met were so incredible, the places I saw so beautiful, and the ideas I encountered were so profound. I’ll never forget any of it, and I’ll never be able to repay Rachid for the opportunity. What a day!

Most of the time, I am simply "Mrs. Olmos," a busy classroom teacher in a rural district in Southwest Washington State. I teach English, WA State History and Drama to students that range from grades 7-12. I believe in allowing students to use their own creativity and individual voices to enrich learning experiences in my classroom. A typical day in my room includes student-led conversations, collaborative projects, and art supplies. Beyond the classroom, I dedicate myself to many areas of educational leadership. Currently, I am a Fulbright Teacher for Global Classrooms and a member of the leadership team for the Washington Teacher Advisory Council. I am proud to be a National Board Certified Teacher, and a facilitator for National Board Candidate cohorts. Over the years, I have served on committees, panels and cohorts at the district, state and national level. My areas of interest include English Language Arts standards, curriculum and assessment, teacher preparation and certification, equity in rural education, project-based learning, and arts-integrated instruction. In my spare time, I have dogs, horses and and a husband to share my life on a small farm surrounded by green hills and rivers. It's a beautiful life. View All Posts

One thought on “A Day Fit for Hercules”

This site uses Akismet to reduce spam. Learn how your comment data is processed.

Links to Check Out

The Center for Strengthening the Teaching Profession (CSTP)